The Truth about Turkey

We have created a petition to tell Butterball—the number one producer of turkeys in America—that Americans are no longer going to purchase turkeys that are inhumanely treated, or support a factory-farm system that creates dire environmental and health consequences. Please sign the petition here. 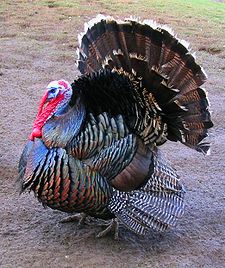 How much do you know about your Thanksgiving turkey? If you buy your turkey from a typical grocery store–and most Americans do–you might not realize that the approximately 46 million turkeys consumed every year come from a factory farm.

But if Thanksgiving is truly about offering gratitude for what we have, it seems fitting to also be grateful to the turkey that many of us will eat for dinner. We ought to think about how that turkey lived before ending up on our tables. With that in mind, let’s first take a look at the life of a turkey in an industrial farm.

Turkeys on factory farms are hatched in incubators mostly on large farms in the Midwest or the South. A few days after hatching, turkeys have their upper beaks snipped off. Once the beak is removed, the turkey can no longer pick and choose what it wants to eat. In their natural environment, turkeys are omnivores. But in a factory farm, turkeys are fed a steady diet of corn-based grain feed laced with antibiotics.

Industrially produced turkeys spend their first three weeks of life crammed into a brooder with hundreds of other birds. In the fourth week, turkey chicks are moved from the brooder to a giant window-less room with 10,000 other turkeys where bright lights shine 24 hours a day. With the lights constantly blaring, natural sleeping, eating, and fertility patterns are completely disrupted and the turkeys are, for the most part, kept awake and eating non-stop. Turkeys have an instinct to roost, or to clutch something when they sleep, but on the floor of a crowded room there is no such opportunity. If this is starting to sound like torture to you, you’re on the mark.

As a result of these unhealthy and crowded living conditions, farmers must feed the turkeys a constant supply of antibiotics. Pesticides are also widely used to inhibit the spread of disease. Antibiotics are also known to promote weight gain in farm animals and this connection is being made in humans now as well. In an effort to maximize the more profitable white breast meat, farmers have genetically selected and bred the white broad breasted turkey, which become so top heavy that they can no longer stand or reproduce and as a result, all industrial turkeys are created by artificial insemination. Turkeys are then brought to slaughter, often in a brutal way.

If that wasn’t enough to make you reconsider your Butterball, there’s more. Thanksgiving is also a time when we honor the abundance of the harvest represented by the bounty on our tables. But supporting a Big Turkey farm (or any factory farm) contributes to the devastation of our natural environment and imperils the safety of our food supply.

According to the USDA, factory-farmed animals in the U.S. produce 61 million tons of waste each year–130 times the volume of human waste. The Environmental Protection Agency reports that hog, chicken, and cattle waste has polluted 35,000 miles of rivers in 22 states and contaminated groundwater in 17 states. Polluted runoff from factory farms and other industrial farms is the biggest water pollution problem in the U.S., according to the EPA.

Human health is impacted in other ways by factory farming. Just this past August, Cargill announced a recall of 185,000 pounds of ground turkey due to Salmonella contamination. With recalls and food-borne illnesses on the rise as a result of conditions in factory farms, it seems wise to avoid these foods for that reason alone.

Factory farmed meat is also implicated in long-term health consequences. Resistance to antibiotics is now a growing concern among many in the medical field and it is largely due to the 29 million pounds administered to factory-raised animals every year. As it stands today, one out of six cases of Campylobacter infection, the most common cause of bacterial food poisoning, is resistant to the antibiotic most used to treat it. And nearly all strains of Staphylococcal infections have become resistant to penicillin, while many are developing resistance to newer drugs as well. Indeed, 80 percent of all antibiotics used in this country are used on factory-farmed animals according to an FDA report.

And finally, there is the nitty-gritty of nutritional value in these factory-farmed foods. Studies show that pastured-based meat and dairy are far more nutritious than their conventional counterparts. They are richer in antioxidants; including vitamins E, beta-carotene, and vitamin C and contain far more Omega-3 fatty acids. Turkeys that are raised on grass and allowed to roam around and practice normal turkey behavior are healthier, safer to eat, good for the environment, and get to live a happy life. Our best option is to eat high quality meat and a lot less of it.

So in the spirit of Thanksgiving, let’s be grateful to the turkey that we’re eating and opt out of supporting a system of abuse and environmental destruction. Eat a pasture-raised turkey or make a vegetarian alternative for this year’s Thanksgiving feast.

We have created a petition to tell Butterball—the number one producer of turkeys in America—that Americans are no longer going to purchase turkeys that are inhumanely treated, or support a factory-farm system that creates dire environmental and health consequences. Please sign the petition here.